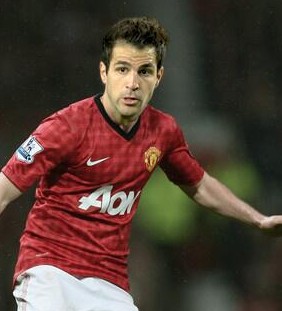 Thiago Alcantara has just signed for Bayern Munich, after weeks of being courted publicly, and presumably months of being courted privately, by Manchester United. Had Sir Alex Ferguson still been there then the pull of being able to play in the Premier League might have been too great, but instead Thiago has opted to play for the European Champions, in a league where the title is practically a given (not least because Bayern hoover up all the top talent from the likes of Borussia Dortmund anyway!)

The rumour mill has now turned to two other midfielders, with United making a public bid for Cesc Fabregas, and also being linked with Marouane Fellaini. If these two bids fail, then what?!

Having seens Alcantara go for over £20m, you would have thought Barca will be looking to keep hold of Fabregas – firstly because they don’t need the money, and secondly because he can be useful for them in the centre of midfield. They have sold on one of their most promising centre-mids, but will still have to paper over the cracks as Iniesta and Xavi’s workrate starts to deteriorate through age (if it hasn’t started doing so already!)

Will United land Cesc? Not likely.

Failing that, the journalists have come up with a plan B, which is basically that David Moyes does what he’s done with his coaching staff, and heads back to Everton to take their best players. With United already linked with paying well over the odds for a 28 year old left-back called Leighton Baines, they are now sticking together a £25m+ bid for Marouane Fellaini.

To be fair, he is exactly the kind of box-to-box midfielder United need, but I’m expecting United to baulk at the proposed £45m joint deal. It would certainly be good business for Everton!

Will United land Fellaini? Probably not.

Having tried to sign three central midfielders (and failed), who will United turn to? I’m hoping they have better scouts in place, who have the ability to spot the rough diamonds in the Brazilian or Argentinean leagues, so that they don’t have to resort to spending as much money as they can on established stars.

Anyone who watches football could have put together the list of centre-mids that currently top their shortlist, but surely there is someone in the foreign leagues (or even lower leagues) that has the right characteristics but isn’t already worth over £20m?

One thing is for sure – United need a new central midfielder. Who do YOU think it should be? Tweet me @ftbllr

Who will win the CL?