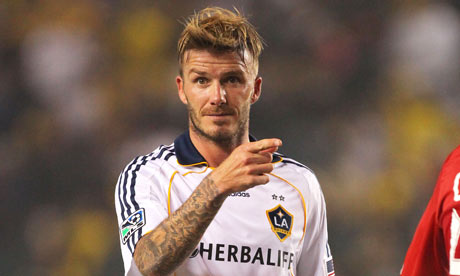 With David Beckham confirming that, after five years at LA Galaxy, he is on the lookout for a new club, we try and work out where next for Brand Beckham.  Beckham is open to going to new teams and new territories – he proved that when he moved from one of the best sides in the world (Real Madrid) for a relatively unheard-of team based in a developing league – so that means that he has the potential to go anywhere in the world!

There are two places that Beckham could realistically end up in England, with his love for United ruling out a host of clubs, but both are very long shots.  If Sir Alex Ferguson would have him, he’d be back at United in a shot!  Unfortunatley, United currently have too many midfielders as it is, and play at a higher level than MLS, so we can’t see it happening.  The fact that he became an icon for the anti-Glazer campaign when he picked up a green-and-gold scarf on his last return to Old Trafford makes this move even less likely.

He could end up at Tottenham, his boyhood club, but with Dembele, Sandro, Bale, Parker, etc, Spurs probably don’t need him, and similarly don’t have the budget for him.

Having spent two christmasses at AC Milan, he might have developed an attraction to the Italian city, which would arguably be Victoria’s pick.  He could continue where he eft off, and is already loved by the fans.  The only problem is that while he has been away the whole squad has changed – AC are no longer looking to depend on the old and weary legs of Gattuso, Nesta et al – heck they even got rid of Andrea Pirlo because they thought he was past his best!?  Are they looking to take on an expensive 37 year old midfielder?  I think not.

The most likely option is Paris Saint Germain.  There were rumours as far back as December 2011 that Beckham would be heading to the French capital at the end of his US career, and that might be about to come true.  Whilst Ligue 1 is in the second tier of European leagues, it is fast developing into one of the most exciting, with PSG have spent literally hundreds of millions on acquiring the best talent from around the globe to play for it – most notably Zlatan Ibrahimovich, but also the likes of Thiago Silva and Ezequiel Lavezzi. Beckham would fit straight with such big names (and egos) and would help the club capture a new audience in the Far East – something that all the clubs are trying to capitalise on ahead of the Financial Fair Play regulations.

If we assume that Beckham will follow the $, as he arguably has done before, there are two other places he could go to and earn money like no other – China and Russia.  Didier Drogba and Nicolas Anelka travelled to Shenhua on multi-million pound deals, whilst Samuel Eto’o remains the world’s best paid footballer at Anzi (who operate from Moscow).  In spite of the fact that he will have pots of cash, I don’t think these two teams have the same attractions, or calibre as PSG.

One last destination that is being hotly tipped is Australia.  The rumour mill has gone into over-drive as to which of 5 A-League clubs he could end up at, but the Beckham’s spokesman has come out in an attempt to stop the rumours by declaring that Beckham has no interest in moving to the other side of the world.  Del Piero and Heskey may have broken some ground for the league, but Beckham probably won’t follow.

Where will Beckham end up?

Tell us where you think he’ll end up – @ftbllr