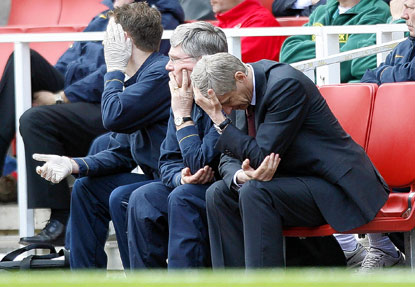 As the last English side crashed out of the Champions League at the Round of 16 stage (leaving us with a particularly boring climax to Europe’s premiere competition), Arsene Wenger questioned just how good English football is right now, compared to the rest of Europe.  “It’s a massive disappointment for English football,” said Wenger “We accept the rest of European football has caught us.”

Whenever the England national side under-perform (bi-annually then!) the press try to turn it into a positive for fans by claiming that it’s because we have so many foreign players in the top division of our domestic league, which blocks the way for young English talent coming through and shrinks an already small pool of elite players. Don’t worry, we are told, it’s a necessary evil to have the best, fastest, greatest league in the world. The thing is, with these latest results, that is simply no longer true. Which just makes following football in England all the more depressing.

This year three Spanish teams made it through to the Quarters, along with two from Germany, and one from each of Turkey, Italy, and France. It’s a far cry from two seasons ago when we had three sides in the final 8 (Arsenal, United and Spurs), but in truth it’s not that much of a surprise – last year we only had one representative (Chelsea), and all our teams were positively out-classed in the Europa League, when United struggled and fell to a mid-table Spanish side. The truth is that English teams simply aren’t that good anymore.

You could argue that many of our top teams are in transition, but for how many years have Arsenal been ‘in transition’, with their latest batch of youngsters heralded for fine passing but lacking heart and failing to actually play good football when it counts. Chelsea have had a trubulent time with managers in recent seasons, and could be galvanised by the right manager, but at the moment they are struggling to even beat the likes of West Brom, let alone Europe’s best.

City have also had a rollercoaster season, with their inconsistency not helped by the Cup of Nations – can you name a player who has shone all season? Aguero, Tevez, Silva et al have all sparkled at various points but have failed to reach the top level and stay there. United without Van Persie would be pretty abject, and basically ordinary. Their midfield is poor, goalkeeper has question marks, and Rooney has failed to live up to the hype.

One of the reasons our top clubs are mediocre is because we have started selling our best players abroad – most of the top players in the world aren’t playing in England, and probably never will do. Messi, Ronaldo, Ibrahimovic, Iniesta, Fabregas, Xavi, etc, etc, must have had opportunities to come to English clubs in the past few seasons but have all decided that it flatters to deceive.

It is perhaps even more telling that the likes of Neymar – the stars of the future – are rarely linked with English clubs, it’s basically a choice between Barcelona, Real, PSG, Bayern and Inter.

And so to the future, and it doesn’t look good… As things stand, our top clubs will continue to attract average foreign talent, but lose out on the top players. Even so, English football players will still be left on the sidelines, and we’ll have many more Champions League’s like this one :(.

The question is what we can do to fix this – the English game ALREADY makes the most money in the world, with 5 of the top 10 richest clubs. It ALREADY fleeces it’s fans for tickets, merchandise, etc, and yet it still can’t compete for the top players, who have started choosing their club based on the players they will have around them as opposed to merely financial gain. If it can’t attract players when it has all this money flowing into the clubs, when will it be able to?

Has the downard spiral begun?