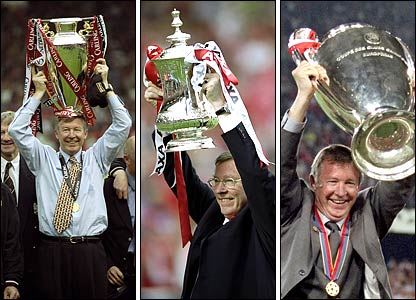 With the United reserve team effectively pushing Manchester United through to the Quarter Finals of the FA Cup, we ask whether it’s realistic for any United fan to be dreaming of another treble to match their 1999 achievements…

Premier League
United are 12 points clear with 12 games to go, which means there are still 36 points to be played for, and more than enough time for the Reds to screw it all up again like they did last year! They have four easy(ish) games (QPR away, Norwich & Reading at home, and Sunderland away) before Man City turn up on the Old Trafford doorstep.

At the same time, City face Chelsea, Villa, Everton and Newcastle, so they will be doing well if they turn up with just 8 games to go (and 24 points to play for) just 12 points behind!

After the City game, United have crunch matches against Arsenal and Chelsea, but we expect the title to be wrapped up before United play at the Emirates so it won’t really come into it.
Chances of United winning it: 95%

FA Cup
After last night’s heroics, United are through to the Quarter Finals. They will probably have two tough games in the FA Cup left, with Chelsea set to be the first test (assuming they manage to beat Boro). Benitez will have a well-drilled team out to face what could be a tired United side by that point, and will be going all out for the trophy to try and secure himself a new contract in the summer, so it won’t be an easy ride.

United then face possibly a definitive match against Man City in either the Semi or Final, which could turn out to be the modern day version of the Arsenal match of 99. Will Giggs be the hero again?
Chances of United winning it: 40%

Champion’s League
One good result away from home does not a trophy make. United coped well with the demands at the Bernabeu, but still only have half of the job done. Whilst the statistics show that out of 18 1-1 draws in the first legs, the first-leg home team has only gone through four times, Real will fancy their chances – not least because their whole season is now built around getting the best out of the players on European nights, with La Liga already all but conceded.

Even if United do manage to pull off a result against Real at OT (without Phil Jones by the looks of it… :/) they will still have to play the likes of PSG, Dortmund, Juventus, Bayern and Barcelona in the Quarters, Semi and then Final. In short, there is a LONG way to go!
Chances of United winning it: 20%